All artwork and text is copyrighted by Paul Lasaine, unless otherwise attributed to the respective copyright owner. It is illegal to publish, print or reproduce any such artwork or text without written permission by the artist or copyright owners.

Welcome to my blog(s)! I have two. This one is for sketches, tutorials, and other "bloggish" stuff.

Be sure to visit my PORTFOLIO PAGE, where you'll find my real work.

Hey gang,
I posted a couple new pieces from Puss in Boots on my Portfolio Page the other day. Check it out!
Posted by Paul Lasaine at 10:34 PM 17 comments:

So my wife and daughter were playing Nintendo Wii today, and they had an interesting idea for an upcoming Toy Story installment:

They suggested that they need to update the toys in Toy Story to include some of the new virtual toys...like the "Mii" characters you create on the Wii. Of course those characters would only appear on a TV screen, but they would be able to interact with Woody and the gang.

I took the concept a step further by suggesting it could be a hybrid of Toy Story and Tron, where some of the Toy Story gang end up having an adventure inside the game?

Come on guys...what do you think? Disney owns both properties. It's perfect!

Here's the pitch:
The film opens with Woody and Buzz playing a Wii (or similar) version of Star Command. They create their 'Mii" avatars, which (because this is Toy Story), come to life inside the game!

Cut to: INSIDE THE GAME. Woody and buzz discover that Emperor Zurg is about to hatch his latest diabolical plan: if your Mii dies...you die! Can this be true? Can Woody and Buzz somehow manage to get a message out to their their real world counterparts...before it's too late!?!?

Come on on guys, who's with me?

Oh, and just in case any of the good folks at Pixar are interested in this idea, it's for sale! Unless of course they're already doing it.
Posted by Paul Lasaine at 1:00 PM 29 comments:

Anyway, not to be out done, here's the backdrop I did for this year's show, Broadway Bound...a musical review that follows three groups of kids, competing to win a trip to Broadway.

I painted it in Photoshop. Then we printed it 10' x 16' (that's about 3m x 5m, for you metric people), and hung it on stage. One of the other parents works at an industrial printing facility. They've got one printer that can print 16' across!

Ahh, the interesting things you get to do when you're a parent. 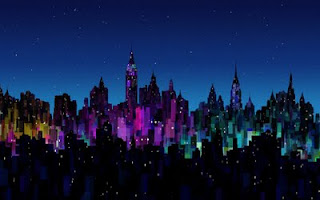 Here's a bunch of (mostly) abstract thumbnail sketches. I do tons of these...often on napkins. Usually, they're no bigger than 2 inches across. They're not for anything specific...just composition practice. I like to do them when I'm bored. I can crank out a lot of them during production meetings. 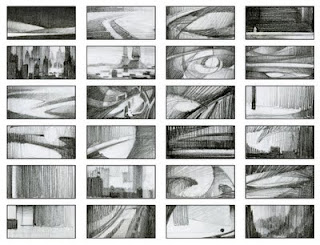 It's hard not to hear about the horrific events unfolding in Japan.

If you've been wondering how you can help, my friend Dice Tsutsumi has set up a relief fund that's really easy to contribute to. Just follow THIS LINK, have a credit card ready, and follow the directions.

If you're not familiar with Dice, he's an amazing artist, and one of the nicest people you'll ever meet. Originally from Japan, he's now an Art Director at Pixar.
Check out his work at: www.simplestroke.com
Posted by Paul Lasaine at 11:36 PM 10 comments: